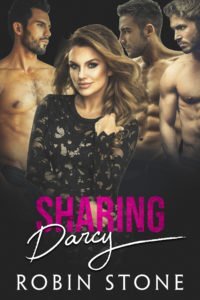 Darcy is a successful interior designer with two bright college-aged daughters. Still recovering from a difficult marriage and divorce, she hasn’t dated much. When she schedules some renovations for her home, she meets sexy young contractor Gabe, who sets her libido on fire.

Gabe and his filthy talk thrills Darcy to her core. Then Darcy meets Jake, a tattooed mason who uses his rough hands to touch Darcy in all the right places. When finish carpenter Andrew starts flirting with her, Darcy questions whether she can handle a third lover along with her growing business.

Darcy needs to buckle down and win a design competition that could bring in enough business to pay her daughters’ tuition. But when the competition judges start to whisper about Darcy’s bedroom activities, Darcy worries she’ll lose the competition. What’s a woman to do, except give in to every smoldering desire, even if it costs her everything?

“My favorite Robin Stone Book so far!…The sexy times were very steamy. If I had this in paperback, the pages would be curling.” – Brenda, Amazon

Buy the ebook
What readers are saying:

"...this book caused me to lose quite a bit of sleep while I was reading it, because it was so hard to put down at night."

"...It was great to sit back and luxuriate in the good times with Darcy as their focus."

"...This book is super hot. Loved it. Robin is a favorite author of mine. She knows how to write some steam!!"

I leaned back in my office chair and checked out the fine male specimen standing in my living room. I was getting a quote for some renovations. I wanted to take down the wall between the kitchen and dining room, and pull up the rug. Add two windows in the dining room. Remove the brick fireplace and replace it with stone.

Dark blue jeans hugged muscular thighs and a nice, tight ass. His work boots were dusty and scuffed, and he wore a red shirt with his company logo on the chest. His chiseled jaw had a dusting of dark stubble, but he couldn’t have been thirty. At forty-three, I figured my days of attracting a man like him were over. I felt really unattractive since my divorce two years ago.

“That’s because Martin’s an asshole,” my best friend Courtney told me. “You were too good for him. Look at his name—Martin. What kind of name is that?”

Good old Courtney, always on my side.

I looked around my office, scrubbed clean of anything related to Martin. I repainted it in a pale pink he would’ve hated, added a new white desk with crystal drawer knobs, and a small chair in floral fabric.

My desk was covered in my favorite things—silver frames with photos of my two girls, a photo of Courtney and me in college, fabric swatches, hardwood flooring samples, and a crystal vase I kept filled with fresh flowers from my yard.

Martin never liked having flowers in the house. He said they made him sneeze.

Martin was allergic to lots of things, like flowers, mold…and being faithful.

“Fuck Martin,” Courtney always said. “You can start over.”

I started over by calling the best divorce lawyer in town, boxing up Martin’s things and leaving them on the front porch, and taking over this room as an office for my interior design business.

Courtney and I chuckled with glee as we cleared Martin’s presence from the room—the hulking, masculine desk, the bookcase with old business books, and the ugly paintings he liked.

Martin always insisted that he should get this room on the first floor as a home office, that his job was more important than mine. He barely used the office, and when he did, he used it to call his cronies and burst into raucous laughter—the laugh I’d loved when we first met that infuriated me now. I wanted to punch him in the throat every time I heard that laugh near the end.

“Don’t worry,” Courtney said, pouring me a glass of wine when she came over to console me. “I had the urge to murder Rick in his sleep for a long time. It fades. You’ll be okay, I promise.”

Courtney had been divorced for five years, so she’d been there, done that. But it was a club I had never wanted to join.

I looked at the framed photos of my girls, Hope and Alexa. They were so bright and beautiful. Hope was a junior in college, and Alexa was a freshman this year. They both attended different colleges over two hours away. Far enough away to have their own life, but close enough to come home for holiday breaks.

I tried not to sob as I hugged my girls goodbye when I dropped them off at college. Courtney took me out for lunch and handed me tissues when the tears streamed down my cheeks.

Martin wasn’t there. He made his choices, but the girls were happy I saw them off.

“Mrs. Anderson?” the stud said. “I have a few things to go over with you if you have a minute.”

I stood and walked over to him. “Please, call me Darcy.”

He grinned, flashing nice teeth and dimples. Damn, he was cute up close. My stomach fluttered.

He looked down at his clipboard. I glanced at the name embroidered on his shirt.

“I took some measurements and did a few calculations.”

He moved closer and showed me his clipboard. I caught a whiff of his scent—clean and fresh, and so unlike Martin’s heavy cologne.

“Here’s the cost to take out the wall. You’re right, it’s not load-bearing.”

I looked at the figure and nodded. It was about what I expected. I was distracted by Gabe’s hands. They looked so strong and rough. I wondered how it would feel to have those rough hands caressing my skin.

“And here’s the cost for adding the windows.”

His arm brushed against mine, and my skin heated.

“Okay,” I said, trying to ignore the way my nipples were tightening in my bra.

“And you wanted a quote to tear up the living room rug and put in hardwood. I have a labor estimate, but the material cost will depend on the kind of wood you want to use.”

I blinked, trying to draw my attention back to the project.

“Hold on,” I said, walking back to my desk. “I’ve chosen a sample I like and added the price per foot on this sticky note.”

He took the small wood sample and wrote some notes on his paper.

“I’m an interior designer,” I said.

“Knew it was somethin’ like that. You’re so sure of what you want.”

“I know exactly what I want,” I said.

Our eyes met, and an undercurrent of heat passed between us. He had deep, expressive brown eyes—eyes you could get lost in.

He licked his full, sensuous lips. “Do you have a card?”

I turned back to my desk, and this time, I could feel his eyes on my ass. I picked up a card and turned back to hand it to him. His thumb brushed against my finger as he took it.

“Give me a call if you need any design advice.”

His eyes scanned my body, and he grinned.

There was another pause, where he was standing just a little too close. But then he stepped back a little.

“I’ll write up the quote and email it to you tomorrow.”

I stuck out my hand. His palm was warm, solid, and a little rough, just as I suspected. A tingly sensation spread up my arm. It had been a while since I touched a man.

This man interested me, even if he was too young.

Leading him to the door, I was conscious of the way my hips swayed in my skirt. “Thanks so much for coming.”

“No problem. Thanks for calling. You’ll be hearing from me soon.”

Closing the door behind him, I watched from my window as he walked to his truck. Tight jeans, tight buns—he was tall and lean, and I suspected he had a six pack under that red shirt.

I pictured Gabe kneeling at my feet, sliding his hand up my calves and thighs. Grabbing my panties and tugging them down my thighs.

He’d lift his fingers and slide them over my pussy, testing for wetness. And I’d be wet for him. Ready.

My work was finished for the day, so I kicked off my shoes and carried them upstairs. All I had to do was tidy my desk and shut down my computer. It was near dinner time, but I didn’t feel like cooking just for me.

I walked into my closet and put my shoes on the rack. Ignoring the empty space where Martin’s clothing used to hang, I chose a pair of yoga pants and a soft, worn t-shirt.

What could I order for dinner? I’d change into my comfy clothes, order takeout, and watch a movie.

Or…I could go out for dinner and maybe some dancing.

When was the last time I went dancing?

I pictured Courtney about six months ago, toasting me with an appletini, shaking her ass to the thumping music of the club. We got pretty drunk that night and laughed so hard, our sides hurt. We had a blast, making fun of the guys we’d gone on dates with. Most of them had been awful.

I glanced at the clock. Courtney had probably left her office by now. I grabbed my phone and called her.

“Where are you? I want—no, need—to go out tonight.”

“That’s my girl! Where are we going?”

I could hear the smile in her voice, making me smile, too.

“Let’s meet for dinner, then go out dancing later.”

Back in my closet, I looked at a black dress that hugged my curves.

“So, what got into you?” Courtney asked. “Wanting to go out on a school night and everything!”

I laughed. It was a Wednesday. Martin didn’t like to go out much during the week. He didn’t get up particularly early or have a long commute, he just disapproved of us having fun when he had work the next day. But I was sick of playing it safe.

“Oh, I don’t know,” I said, thinking about Gabe’s rough, strong hands. “I just feel like having some fun!”

Tossing my phone on the bed, I put away the comfy clothes and took two dresses out of my closet, one black and one plum, both dresses with a plunging neckline. The black dress was nice, but I liked the plum better.

I unzipped my skirt and shimmied out of it. I was unbuttoning my blouse when the phone rang again. Thinking it was Courtney, I grabbed it quickly and picked it up.

“Hi,” a male voice said. “Is this Darcy? Darcy Anderson?”

“Yes, I’m sorry, I thought it was someone else.” I used my cell phone for business calls, so I switched to my more businesslike voice. “How can I help you?”

“This is Gabe. I came over to give you an estimate today. And I’d like to see you tonight.”